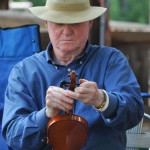 A man never stands so tall as when he leans over to help a child.
~Abraham Lincoln

I was signing my children’s book at a little music festival in our Tennessee town last weekend. It was a beautiful day until, seemingly out of nowhere, black clouds darkened the sky. The ensuing rain forced us (and several others) to take cover underneath a pavilion. It was there that we met a simple hero—a hero who made an impact on a child; my child.

His name is Jim…an 81-year old Arkansas farm boy who grew up plowing cotton fields behind a mule and later became a United States Air Force Major. Now retired, Jim travels around to these kinds of festivals to do some “pickin’ and grinnin'” as he put it. Jim has a welcoming face and kind eyes. You get the feeling that there are more than a few stories underneath that fedora-style hat.

He caught my daughter Emily’s eye when he opened his case, revealing a beautiful old fiddle. It was well cared for, but even my untrained eye could see that it had a lot of mileage on it. He rested it on his shoulder, took out his bow and began to play—and man did he play! A small crowd gathered. Their expressions were no match for my daughter’s smile. When he finished, Emily told him that she started taking lessons but that her fiddle has a broken string. He offered to fix it for her if she went home to get it, which of course she did (thanks to Mom). 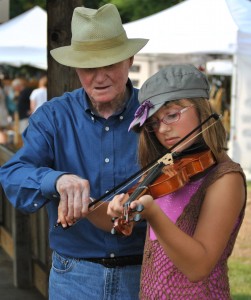 An hour later I looked over from my table and saw Jim teaching my daughter, with her newly strung fiddle, his playing technique. He told her that he can’t read music, that playing the fiddle just comes from inside. He taught her more in 20 minutes than she learned in any previous lesson. He gave her a “cheat sheet” to practice from and made sure that my wife jotted down his email address in case she or Emily ever has any questions. He promised he’d be back next year “If I’m still vertical.”

That night, Emily was in her room practicing the fiddle—the same fiddle that for weeks sat idle, in danger of becoming a passing fad. I have no idea if she’ll continue to practice. I don’t know if she’ll become a great fiddle player. I do know that a kind man took the time to encourage a child; to share his gift. I do know that there are hidden heroes all around us and I’m reminded that sometimes dark clouds form, they darken the sky, and the rain forces us into a new place; a place where God’s really good things can still emerge.

Let’s challenge ourselves to share our gifts, to touch a child, to increase our percentage. Imagine what a difference we could make.